This morning I woke up to the sound of the waves on the Pacific Ocean. It was pretty amazing. This was going to be our shortest driving day but we had a lot to see so after a short walk on the beach it was time to hit the road. 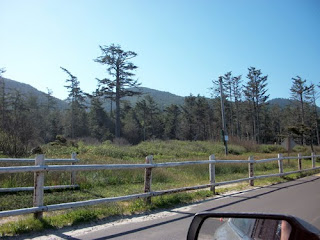 Here's a pic of where our campsite was. 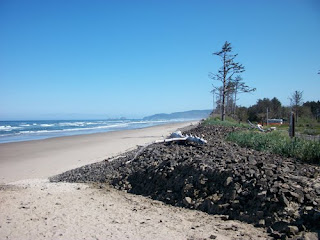 And one of the view from just behind the bushes of our campsite.

So our mission today was to find star fish and sea lions on the Oregon coast. There are plenty of both but to find the starfish you need to catch them at low tide when the water reveals these little pools. Our first opportunity was at Oceanside. There were some really cool rocks that had some holes in the middle of them. 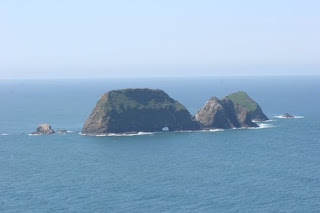 Here's a pic from a little further up the coast. You can see one of the openings better. 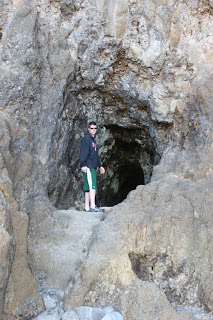 This is a pic of Brandon heading into a tunnel that leads through one of the big rock formations from one alcove to another. It was pretty cool.

We didn't find any starfish at the first stop so we headed to the next opportunity just up the road. 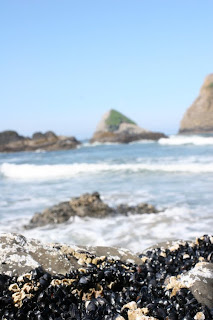 Again no starfish, but I did find a ton of little muscles. 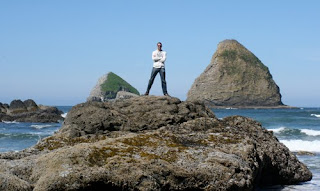 Also got a cool pic with some of the big rocks in the back.

Our next stop was Cape Meares where Brandon wanted to stop to see a lighthouse. The lighthouse was okay but we found this sweet tree called Octopus Tree. 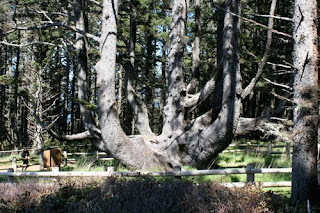 Then we ran into some girls that were from Minnesota. Amanda and Nikki (I think...) Nikki lives in Oregon now and said that we could for sure see some starfish at Hug Point, so that's where we headed. Hug Point is like 45 miles up the coast and when we get there, who do we run into again? Amanda & Nikki! So we bust their chops about stalking us and then get a pic with them. 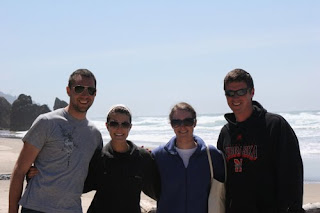 Here we all are.

The tide is too high to walk around this point so I'm trying to find a way around via climbing... 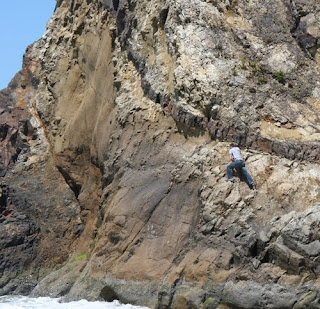 That idea was abandoned when I grabbed a chunk of rock that came right off. I don't need to die. 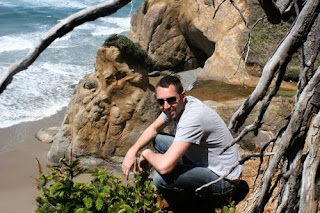 Then we tried the up and over route but when we got to the other side we realized there was no way down. So this was as close as we got to the starfish pools that were right behind me.

Our last stop before Seattle was at Ecola State Park. There should have been a ton of sea lions there but for whatever reason they weren't out. I can't imagine anyone or anything not wanting to be in the sun on this beautiful day but whatever... 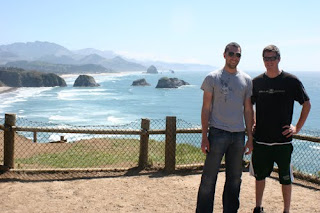 Here's Brandon & I at one of the overlooks. 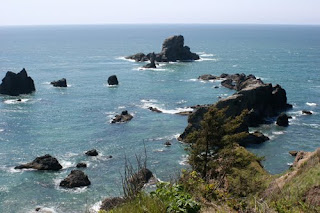 And here's one of the rocks where the seals should be.

That was the end of the site seeing for the day. We made a B-line for Seattle so we wouldn't be too late for dinner. I think we made a couple people sweat but at the end of the day it worked out fine.
Posted by Philip at 5:24 PM