Wow! Today was incredible! So we got into Steamboat after the sun went down on Saturday night so we needed to backtrack about 10 miles to get a photo in the day time. What we thought was going to be just a quick drive up there to snap a pic wound up being the trips most challenging shot yet! We were looking for the Rabbit Ears Pass Memorial which we assumed would be just on the side of the road of Rabbit Ears Pass. When we got up there we couldn't find anything and we also didn't see the rabbit ears off in the distance. 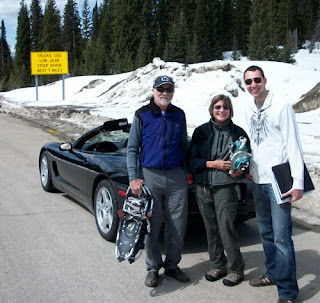 So I'm trying to look stuff up on my phone when a couple in a convertible Corvette pull up to go snow shoeing. I run over to ask them if they are from around here and they were so I ask where this memorial is. They're not sure but they know where the rabbit ears are and they send us down the road a few more miles. They also mentioned that they just got a bunch of snow but they're still down for the year with only 300 inches instead of their usual 400+! After said few miles I don't see anything and return to the phone to find some answers. I find a blog with a pic of the monument and a map attached to it.

It says the monument is just east of Dumont Lake and there is a road leading up there. Sweet!! So we are on 40 and we drive down to where CO Rd 199 should be. Well what we find is street signs buried in 8+ ft. of snow. Bummer dude! Well we're not deterred by a little work so we set off for a hike. It only looks like it's 1/2 mile or so and this monument is like 10 ft tall so we'll be able to see it no sweat! 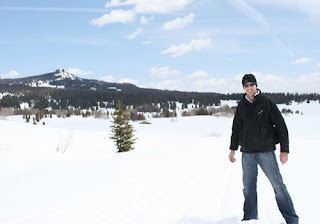 Here's a pic of me standing on what should be the road under 8 ft. of snow. So we set off on our adventure into the wild to find where this monument is. The hike is going well. It would have been nice to have snow shoes but we're making due... besides it's not that far. Then it get's warm and we decide to take off our shirts. It's like 65 with no wind and this sounds like a great idea. Then we found some sweet snow drifts to do back flips off of and decide to do that for a minute. Back on our mission we get to the edge of the lake which is still frozen and buried in snow. I thought I found the monument but it turned out to be just a big rock. We realize we may be in trouble when we spot a bathroom that is easily 9 ft tall and it's completely buried in snow. We may never find this thing... but we're sooo close and I know it's here so we keep looking. Of course looking consists of wandering around in the snow, up hills, all at 9700 ft above sea level. I run a lot and was having trouble so I know Brandon was just dying! We've been hiking now for about 2 hours and I decide that we've got to just let it go. We're both super tired and we didn't bring any water or food so we start to head back. We can see the road in the distance and Brandon is focused on that. I'm still 1/2 looking for the location and trying to judge based on the tree line and rabbit ears in the distance where the pic could have been taken from. All of a sudden I see a black spot in the middle of a sea of white. Is it bear scat? Is it a tree top? I go to investigate and it's a rock! It's the top of the Rabbit Ears Pass Memorial! Everything lines up! Brandon and I are freakin' out! Someone was looking out for us on that one. 1" more of snow and we never would have seen it! 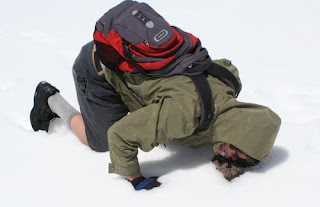 Here's the original pic and the one we got. I've added arrows to point out the rocks and the Rabbit Ears in the background.

Here's the path we took roughly.

At the end of the trip we had walked 4.61 miles and climbed from 9450 to 9800 ft. We got the most unreal sunburn of our lives, but it was totally worth finding that memorial! So then we headed off to Salt Lake City. 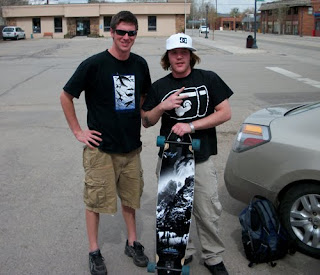 On the way out of Steamboat Springs we picked up a hitch-hiker named Trevor and gave him a ride 17 miles to his home in Hayden. When we got to Salt Lake City we didn't have a place to stay so I told Brandon we should just drive straight through to Reno. It's only another 550 miles! Sure why not. We made one stop for a pic in the Bonneville Salt Flats and rolled into Reno around 3am. We covered about 900 miles and 3 states today. It was epic for sure!
Posted by Philip at 6:23 PM