Monday December 13th was the first day that I didn't have to rush to do anything. No biking to do, no marathon to run, no plane to catch, it was just a day to have fun. I got up at 6am and grabbed some coffee and headed down to the pier behind the hotel to watch the sunrise over Diamond Head. Truth be told, I actually wanted to hike Diamond Head and get some sunrise pics from the top of the crater, however, they closed the road for repairs for the week I was there! Grrrr! Oh well. So my plan for that day was to meet up with Shelly & Beth and do some sea kayaking. After a litte fiasco at the rental car place (apparently Shelly was on the 'do not rent to' list - LOL!) we got our car and headed to Kailua. We got our kayaks and decided to grab some sandwiches on the way out so we could have a little picnic on one of the islands. The people at the kayak place told us it would take 1 1/2 hours to paddle to this island... I did it in 30 minutes flat! BOOM! 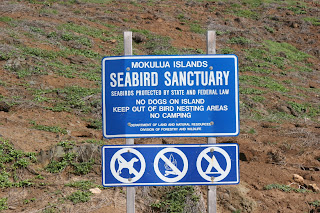 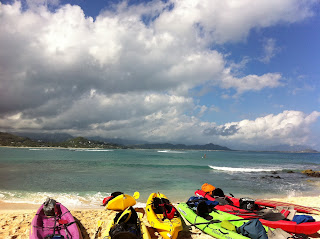 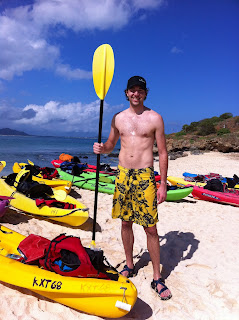 We set out on a little exploration trip of the island and found some really cool stuff. There was a tide pool and some interesting rock formations. We found a shady part of the island and had a little picnic before heading out. On the way off the island I paddled out to sea a bit and tried to surf some waves in my kayak. It was a lot harder than it seemed in my head. We then went on to do a little snorkeling and headed back in to shore because Beth had a plane to catch.

Later that night I went out for a nice sushi dinner at Doraku with Marie & Shelly. I ordered "omakase" for us which is basically chef's choice. The chef, Hide Yoshimoto, apparently didn't get to do that much. He was so impressed that I knew what it was that he came out to speak with me, brought everything out himself and explained exactly what it was, how it was prepared and how it should be eaten. The food was spectacular as was the service! 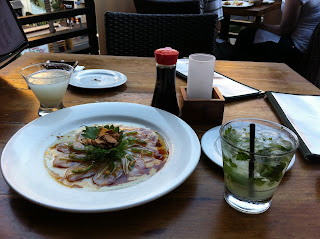 Here is one of the dishes he made for us. I think this one was red snapper with deep fried ginger chips. 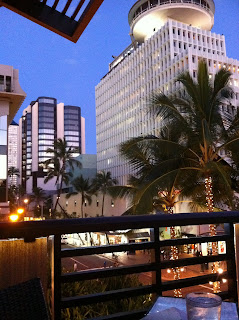 This is the view from the restaurant. 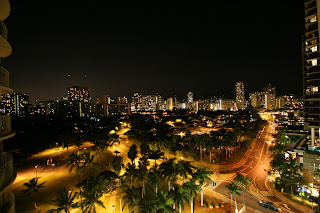 Back at the hotel, this is the view from my balcony.

The next day I tried my hand at surfing. I got up the first time which was awesome but apparently that was beginners luck because I fell a ton after that. It was a ton of fun though! After that I decided to just chill for the rest of the day. I had to figure out where I was going to stay the next night because my plane didn't leave until Thursday but my hotel reservation ended on Wednesday. Technically it ended on Monday but I was able to crash with two different people on Monday and Tuesday night. No such luck for Wednesday though. I also wanted to drive up to the north shore to see the big pipeline surfing competition. So what better solution than to rent a Jeep, drive to the north side of the island and sleep in the Jeep?! I wound up getting a soft top Jeep Wrangler (I've always wanted one of these) and cruising around. 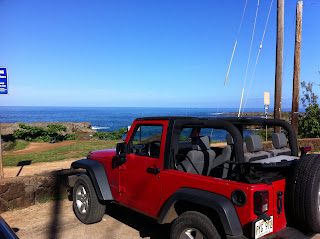 The surf competition started early so I woke up at 5:30 and got some coffee. There were a ton of locals out surfing before the competition began at 8am. 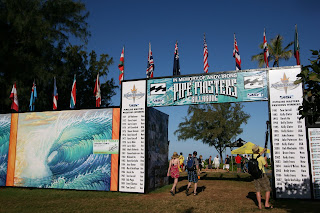 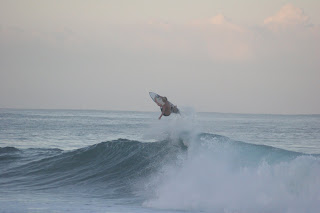 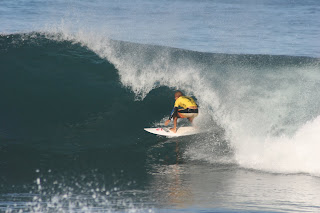 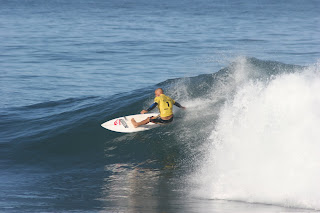 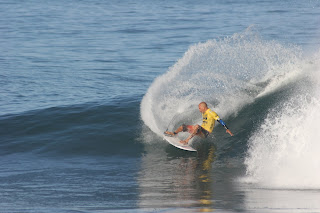 The last 3 pics are of Kelly Slater. He's freakin' amazing! He's won Pipeline Masters like 6 times since he started.

After I saw Kelly surf it was off to cruise the island in my Jeep with the top down! 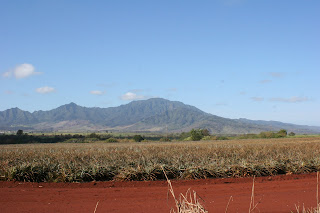 Here's the Dole plantation. Those are all pineapples. 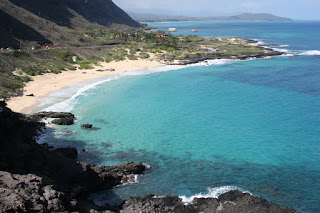 This is a spot over on the east side of the island. Just gorgeous!

As my time on the island was drawing to a close I was reflecting on the trip and comparing it to others. In all my travels I've seen some amazing things but I've always been ready to come home. For the first time, I felt like I could stay. I had no desire to leave whatsoever. I've heard people say that time and time again about Hawaii but now that I've been there I totally understand! If you haven't been... GO!
Posted by Philip at 4:00 PM No comments: 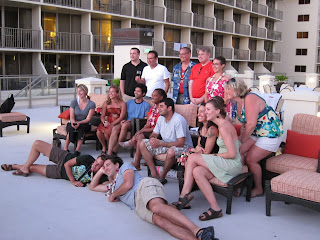 The Honolulu Marathon was my 6th marathon. There's always something a little different about each one with regards to how it's run, food, water, start time etc... This one was start time. The race begins at 5am! That means I had to get out of bed at 2:45am to get ready, eat, hydrate and walk from my hotel to the start line. It sucked getting up, but if you've ever competed in anything before you know that you're usually pretty anxious and therefore don't sleep the best so it's not the end of the world. We had a little breakfast down by the pool and took a group photo. 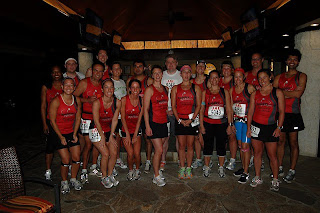 Then it was off to the start of the race. I was told it was only about a .5 mile walk to the start. It took 45 min. I suspect it was more like 2.5 miles. Then I had to use the restroom... that was another 45 min. wait because apparently some half-wit was in charge of logistics. I would think anyone with a 3rd grade education could figure out that if you have 30,000 runners, you should probably order up more than 16 port-a-potties. I watched the fireworks for the start of the marathon from the bathroom line. 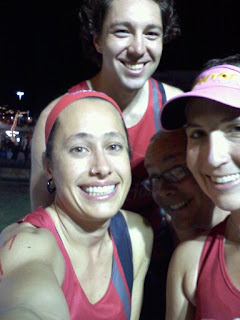 Then I had to rush to catch up to the very back group of runners... the 6+ hour people and just barely got in front of the walkers. I crossed the START line 12 minutes after the gun went off. Then Mary, Graham and I had to fight our way through the sea of people at the back to get to the group we wanted to be with. I have to say it was quite interesting. As we passed masses of people we got to see all sorts of crazy costumes and groups of people. There were people dressed for getting married with full dresses and tuxes. There were people running in traditional Hawaiian outfits like grass skirts and barefoot. I even saw a dude in getas, those traditional Japanese wood sandals, and a kimono. He ran the whole race in that! There were actually a ton of cool Japanese outfits because like 70% of the people that run the Honolulu Marathon come over from Japan to do it.

I was a little worried about how I was going to feel. I hadn't really trained for the race and I had just biked 242 miles that week so I didn't have high expectations. I ran the first 1/2 with my friend Graham in about 2:03. I was feeling good so I told him I was going to take off. The sun was coming up and it was getting warm but I was still feeling pretty good. I've never run a negative split (where your second half is faster than the first) but I was feelin' it today. At mile 24 I felt good enough to stop on the side of the course and slam a beer that some guys were handing out. It was awesome! Then I headed out and came across the finish in 4:01:00. I was really shooting for sub 4hrs but no biggie. I was super stoked to run a negative split and I felt really good at the end. 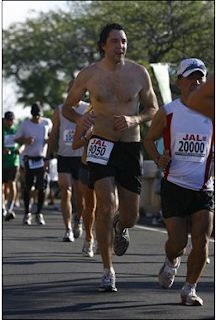 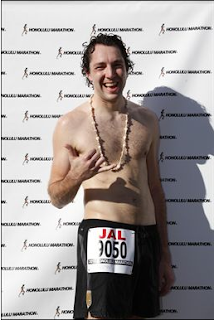 The nice thing about having a race that starts at 5am is that I was done by 9am and had the day to relax. I went back to the hotel and took a nap and then me the group for a luau later on. Let me just tell you, if you feel the need to go to a luau in Hawaii, make sure you go to the Polynesian Cultural Center. We went to another place and it was pretty cheesy. The food was mediocre at best and the drinks were hella expensive (the 'included' drinks are crap). 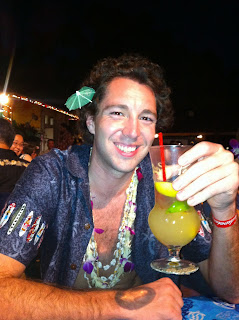 This drink I had to use one of my drink tickets plus pay $12 for! Crazy! On the upside it was good to hang out with the team and celebrate another awesome Bolder Options destination marathon. It's hard not to have a good time with a great group of people! Right cousins?! LOL!
Posted by Philip at 2:42 PM 2 comments: