Ahhhh, internet again!! It's been 3 days since I've been on my computer so there's a ton of work to be done on this. Day 6 took us from Reno, NV to Eureka, CA. Leaving Reno they told us there might be snow in the mountains and to drive careful. Apparently the amount of snow that makes them nervous is substantially lower than what makes me nervous because the drive was a breeze. It did snow all the way to Lake Tahoe though. Coming over the mountain pass and seeing Tahoe for the first time was amazing! Surrounded by snow covered mountains the teal blue color of the water pops out of the landscape. 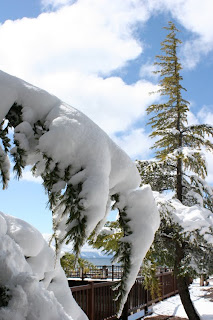 Here's a snow covered tree right on the shore. 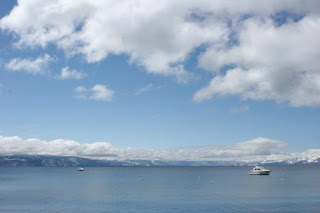 A clear view out into the icy water. 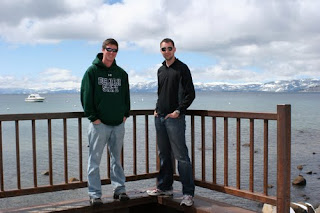 A pic of Brandon & Me on the shore.

In the original trip my grandfather took they didn't go to Lake Tahoe but it was only a 12.5 mile detour off the route and I think it was totally worth it. So back on the road again we drive through California on some super twisty roads that were a ton of fun to drive. We passed through the outer suburbs of Sacramento and then cut north to Chico. On the way to Chico we stopped at a roadside stand to buy some fresh cherries. They were awesome but I think I was more impressed with the fact that I could buy something other than corn on the side of the road. Chico was an amazing city and I definitely want to go back to visit. We wandered around the city for a little bit and visited the library to look into old records to find where one of our photos was taken. After getting the shot we headed out of town and continued on. After more hairpin turns and mountain passes we were just about tho Eureka when the sun started to set. 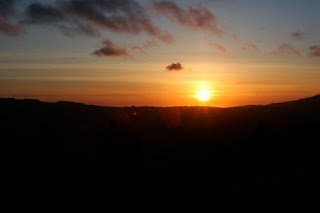 Here's a pic of the sunset about 40 miles inland from the west coast.

We got to Eureka and set up camp in the dark and then went back into town for some food. All in all it was a great day but nothing too crazy. 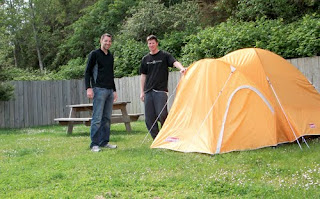 Here's a pic of our campsite at the KOA in Eureka.
Posted by Philip at 9:39 AM